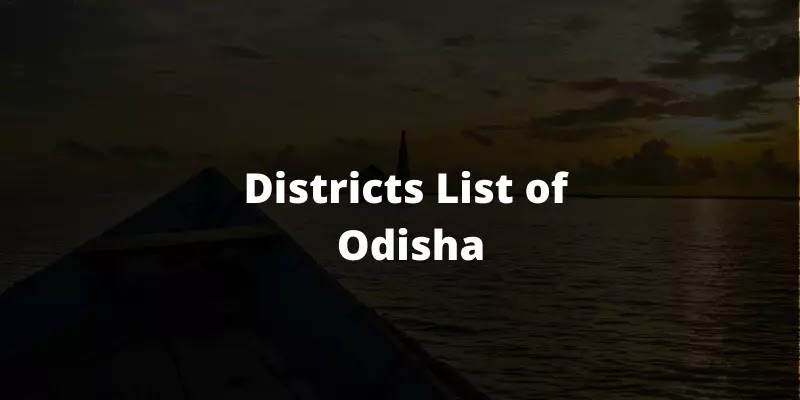 Districts List of Odisha: Odisha was famous as "Udra", "Koshala", "Kalinga" and "Utkal". All the regions combined and came under one administration known as Odisha. It was formerly known as Orissa. On 1st April 1936, the state became a separate state due to the relentless efforts of many great men. So we celebrate April 1st as Odisha day.

Odia is the main language of Odisha. Consisting of 30 districts, 314 blocks it is among one of the most populated states of India. As per the 2011 census report, it is the 11th largest by population and the 8th largest state by area. According to the census, 41,974,218 people are living in this state in an area of 155,707km square.

Sambar and the Blue jay is the state animal and bird of Odisha. Aswath tree is the state tree and Ashoka is the state flower of Odisha. Naveen Pattanayak is the current CM and Ganeshi Lal is the governor of the state. The Legislative council of Odisha is in the Capital Bhubaneshwar and it consists of 147 members of the Legislative Assembly. Odisha has 21 Lok Sabha seats.

While it has Gi tag for Rasogola, the government has also applied for Gi tag for the famous silver work of Cuttack. Cuttack is the old capital of Odisha and is known as the silver city of Odisha.

Geographically Odisha is in the eastern part of India. The state is sharing a border with Andhra Pradesh, Telengana, Chhattisgarh, Jharkhand, and West Bengal. It has a border dispute with Andhra Pradesh and a water dispute with Chhattisgarh. The Bay of Bengal is covering the Eastern part. Paradeep is the natural port of the state, and it is the busiest port of India. It is considered the main economic zone of Odisha.

The capital Bhubaneshwar is known as the city of temples because 700 temples are present here. Various temples, including Ram temple, Mukteshwar temple, and Lingaraj temple are located in the city. The city was established in 1947. It replaced Cuttack as the capital on 19th august 1949. It is located in the eastern region of the state. It lies on the bank of the Mahanadi river in the Khordha district. It is a mountainous region.