Know here all about political Science: Both the terms politics and political science derived from the Greek word polis, which means the city-states. 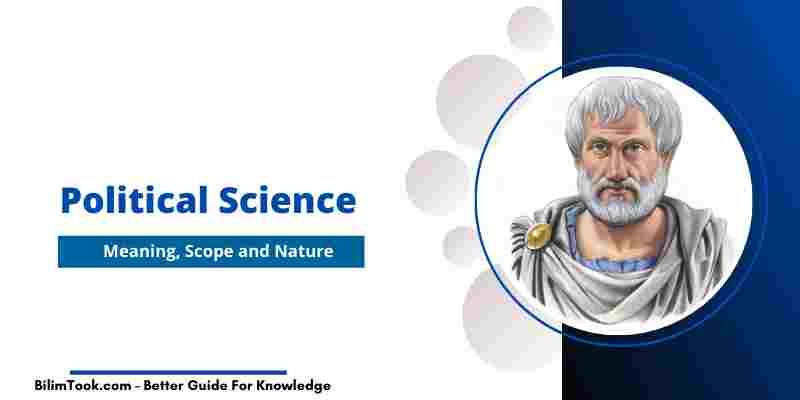 Meaning, Scope, and Nature of Political Science - Both the terms politics and political science has been derived from the Greek word polis, which means city-states. Politics as a social science this scripture was created in the ancient Greek city-state in the fifth or fourth century BC. The Greek philosopher Plato has written the book "The Republic" and the Greek philosopher Aristotle has written the book "The Politics".

Aristotle distinguished politics from theology in his book "The Politics" and gave it the status of a unique scripture. He (Aristotle) is known as the father of political science because of his foresight and bilingual writing.

The scope of political science refers to the content of its study. The study of states and governments, States and Governments, Various Political Institutions, Political Life, General Administration, Autonomy, Relations between Individuals and States, Citizenship, International Religions and Organizations, International Relations and Problems, Political Theory and Philosophy, Comparative Governments and Constitutions, etc., include the scope of politics.

According to Catlin, ‘political science and sociology are not only intermittent, but they are also harmonious’. Political science teaches from the philosophy of how the activities of the individual should be regulated to achieve the goal of the nation. The nation is a political institution composed of elements of a particular region, population, government, and so on. Sovereignty is an important component of the nation. It separates the nation from other unions.

According to Aristotle Man is a social creature, who can live without society as an animal or a deity.

Organized people are called unions to achieve specific goals. The state is a political union. Only the nation has sovereignty, But no other union or society has sovereignty. The state is called the Union of Unions because the state controls other unions by the power of sovereignty. The nation that organized itself for the idea of a political forum in the hope of independence or independence is called a nation. A nation can be formed with more than one, But it is impossible to form multiple nations within one nation.

Some General FAQ of Political Science