The basic difference between nation and society

Since man is a social and political creature, society and the nation are essential to him. Human life is meaningless without society or nation. 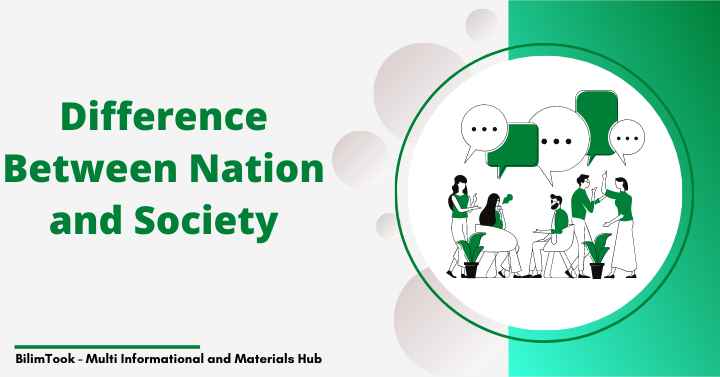 In this article, I going to explain the basic difference between national and society. Last week I have written about Meaning, Scope, and Nature of Political Science. Since man is a social and political creature, society and the nation are essential to him. Human life is meaningless without society or nation.
There is no difference between society and the nation in general behavior. Both are often used in the same sense.  In fact, society is all types of organization, which includes all kinds of social institutions, such as nations, government, and other unions. Let take a look at the basic difference between nations and society.

Difference between nation and society

The society is a social system, the state is a political system. Society is made of individuals, groups, institutions, and associations formed by them. As the state is a part of society, the scope of society is broader than that of the state.
Society is involved in all kinds of economic, religious, cultural, and political activities of human beings. But the state is only involved with certain political activities of man.
Society has been created before the nation. Humans are social beings in nature. Human beings create different types of social organizations to fulfill their different needs. The nation is a better social organization. The state has some boundaries or regions, but society has no specific boundaries.
The activities of the society and the nation are separate. Society governs all forms of social politics and activities and engages in countless activities for the pursuit of all kinds of goals in life. The state only engages in extraterritorial relations between individuals in society through a political alliance and religious discipline.
Society is a larger organization than the nation, which includes both organized and unorganized groups. But the state determines, expresses, and fulfills its will and objectives through an organized government.  The state has sovereignty, but society does not. The state enforces all kinds of laws and policies by virtue of sovereignty.